In this post we'll be using HTTP with Apache on OS X Yosemite. In a previous post I showed you how to create a self-signed certificate. If you followed along then you created the following files in the /etc/apache2/ssl folder:

Now, we are going to go through the steps necessary to set up HTTPS on our local Apache web server:

First, let's answer a simple question: "Why?" In an effort to support HTTPS Everywhere we are migrating our website to use HTTPS. In later blog posts I will show how we will perform the migration to HTTPS.

The real reason for using HTTPS is to secure the web. The risks to users and privacy are at the highest levels today, and I suspect that the risks will only increase, while our users will increasingly expect the protection of their privacy.

My httpd.conf file is located at: /etc/apache2/httpd.conf

Find the following line and uncomment it. Just in case you are not sure, comments have a leading pound/hash symbol ( # ) -- just remove it. 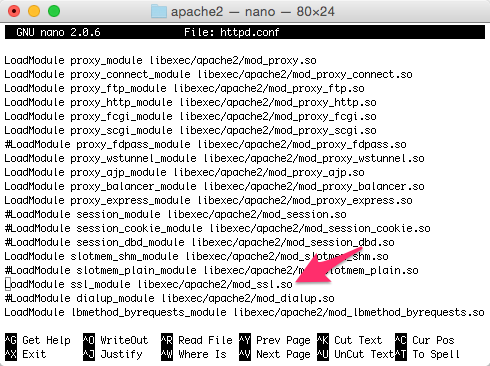 While we still have the httpd.conf file open, we also need to uncomment the line that includes the httpd-ssl.conf file. 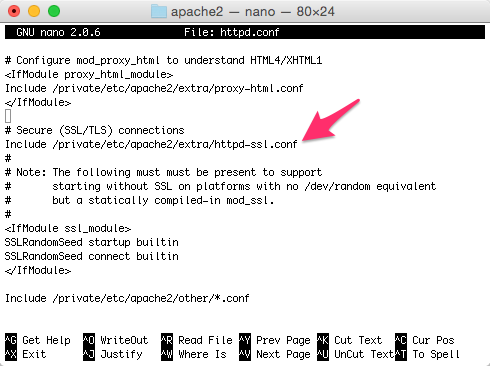 The last step is to configure a new virtual host that is bound to port 443 (HTTPS). There is already a sample <VirtualHost> record in the httpd-ssl.conf file. I suggest you first remove it, or comment it all out, so that you can just paste in the necessary code at the bottom of the file.

You will need to open the file using nano:

The first step is to declare a new virtual host using the .

Next, within the <VirtualHost> directive, we will declare some basic host settings:

To enable the SSL engine in Apache we simply add set the setting to "on".

Using the paths as I described at the beginning, we will tell the SSL engine the location of the certificate request file (csr) and the private host key (.key).

There are lots of options that you can (and should if you are setting up a production server) configure for the SSL Engine, including the supported ciphers and the ordering of the ciphers used. If you have been following any recent security news, you have probably heard of the POODLE security flaw that uses a SSL 3.0 fallback vulnerability. To prevent any risk on a production server you must configure your server to use the latest version of TLS (1.3 as of this writing), and remove the support for teh older SSL version 2.0 and 3.0 protocols.

Protocols and ciphers -- oh my!

If you are confused about all of the protocols, ciphers, prioritization logic, etc. Then I would recommend that you read the Mozilla article on Server Side security and TLS. They offer some best practice configurations for production environments and various web servers; including: IIS, Apache and Nginx.

For our local development server we are not going to worry about the protocols/ciphers and just simply add the following options.

Last, we need to close the <VirtualHost> directive. Our complete virtual host in the httpd-ssl.conf file should look like this:

In case this is a new website, you should also modify your hosts file to direct the domain name to your local Apache web server. If you already had the domain configured in your hosts file, then you can skip this step.

The hosts file is located at: /etc/hosts

Note that the file does not have an extension. Let's open this up in nano.

Then, add a new line for your website. I am using local.example.com. 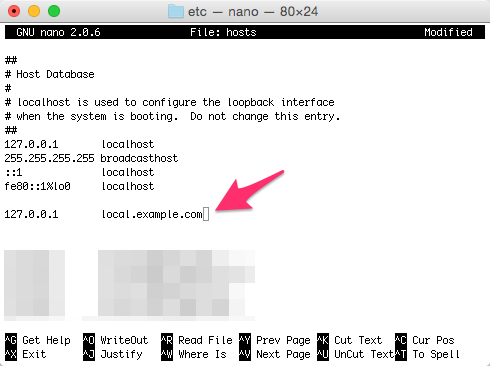 The last step is to test our new configuration, and assuming everything is good, restart the Apache web server. 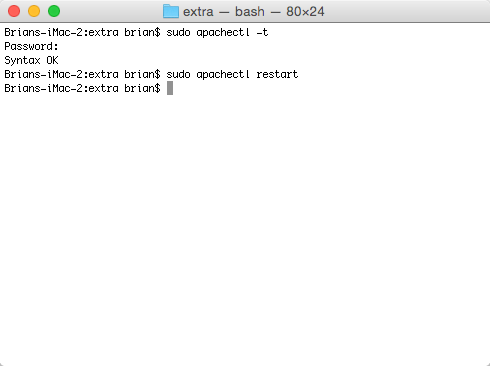 All done. You are now serving your website over HTTPS using Apache.