As part of a project to integrate with a REST API I have developed a small project for OAuth 1.0 using ColdFusion. The components are all written in script syntax, so ColdFusion 9 is required to run it. The goal was to minimally implement the OAuth two step process quickly and easily. I thought I would share it here in case you are looking for a CFML solution to OAuth 1.0. 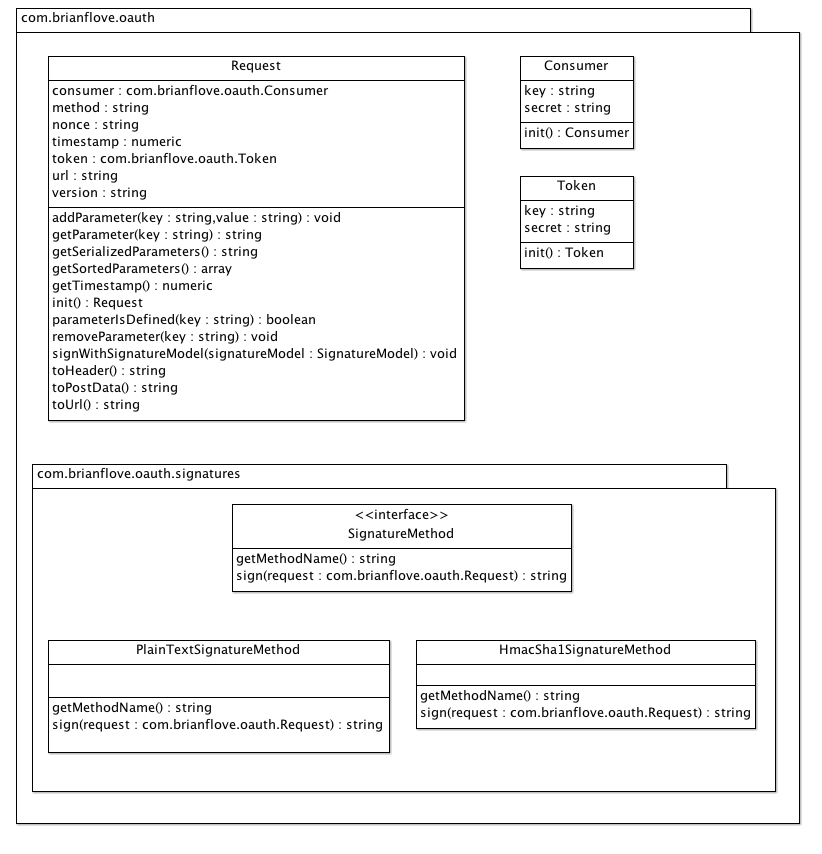 To start, let's take a quick look at the class diagram. As you can see the package consists of the following classes:

The Request class is the primary class that creates a signed request that can be used for connecting to your favorite API using OAuth.

Setting Up the Request

Setting up the request is rather straight forward. We will instantiate the Request, Consumer and Token objects. Then, we will set up the consumer and tokens as instructed by the API you are developing against. In my example I will only set up the consumer secret and consumer key strings. From there we need to create the necessary signature method object and sign the request. Finally, using the signed request we can send the HTTP request to the OAuth producer.

Setting up the request object will be based on the API documentation provided by the service you are using. In my case I am performing a GET HTTP request against the BuzzStream API so I set the method and url properties accordingly. Then we need to set the consumer and token objects into the request.

I am signing the request using the HMAC-SHA1 method as required for my implementation. The OAuth package that I am providing with this article also implements the PLAINTEXT signature method. Simply use that component in place of the HmacSha1SignatureMethod component that I am using above.

To test the OAuth code I am performing a basic HTTP request against the API to ensure that I receive a 200 status code in response. I am simply using the writeDump() function to show the result of the HTTP request.

I also want to mention that I am using CFUnit 1.0 for unit testing. Should you want to run the tests, just browse to the com/brianflove/tests/run.cfm file.