I have prepared a tutorial and presentation to give an overview and detailed look at the LESS programming language. This tutorial will cover:

So, what exactly is LESS?

Why should a web developer or front-end UI engineer use LESS over traditional CSS?

CSS preprocessors such as LESS do not extend the functionality of CSS; only the browser vendors can change the way CSS is implemented. Instead, a CSS preprocessor makes the development flow for a developer much easier. If you are already combining, minimizing and compressing your CSS, then using a CSS preprocessor is a logical next-step.

What can LESS do?

LESS introduces many features that CSS doesn't provide, such as:

Let's look at these features in depth.

In the example above, we are defining a variable named @webucatorOrange, which contains the specific orange color used on our web site. We can then use this variable anywhere throughout our LESS code. This example also shows the CSS that is output when compiling the LESS to CSS.

In this example, we are defining a variable named @padding, which stores a size of 5 pixels. We can then use this @padding size throughout our LESS code. And, as we will see later, we can use this variable in mathematical operations or functions.

In this example above we are defining a mixin called border-radius, which is used to replicate the cross-browser functionality of the CSS property border-radius. I find it good practice to name the mixins as close as possible to the traditional CSS properties. Mixins can accept parameters, which can also have a default value. Mixins do not need to have parameters. In this example, the mixin has a single parameter named @radius with the default value of 2 pixels. We can then use this parameter in our resulting CSS rules. I am also defining a variable named @gray that stores a color. On the right you can see the CSS that is output when we compile the LESS. Wherever we call the mixin, the resulting CSS is output where we called it; with the appropriate value for the parameter as specified. 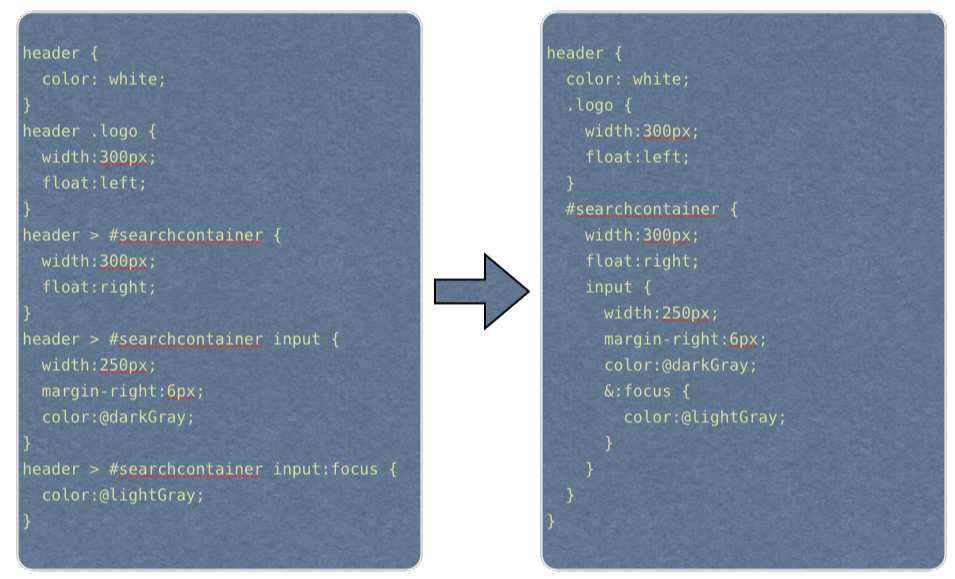 In this example, we are using the traditional cascading approach on the left, and the nested approach on the right. As you can see, the nested approach reduces duplication of selectors and closely mimics the structure of the HTML or DOM. It is also much cleaner and easier to read -- making our lives easier as we have to maintain the code in the future. We are also using the & combinator for the :focus pseudo selector, which we will discuss in more detail next.

In this example we are using the &:focus and &.inline combinators on the img selector. You can see the resulting CSS that is output on the right. The :focus pseudo selector is concatenated with the parent selector, resulting in img:focus. The second combinator shows that we can use this with classes and other selectors besides pseudo classes. Here, I am specifying images that have the class "inline" applied to them, and then setting the display property to inline.

This example shows some simple math operations. Here I am just multiplying and adding to an existing variable that is storing a length of 2 pixels. You can do much more than just add and multiply simple pixels. Here are some more examples:

There are also several math functions that LESS provides:

Color functions enable you to apply various functions to create new colors or obtain information about existing colors. These include:

The use of @import() in your CSS is without-a-doubt a terrible idea. This causes extra HTTP requests to be made from the client (browser) to your server, for each file you are imported. If you have broken your CSS up into 5 different files, this is 5 requests, rather than a single request. For site performance, you should have a single CSS file that is requested by the client. Also, a general rule of thumb is to not use inline styles. The CSS file that your client requests is cached by the browser, and therefore is not downloaded on each subsequent page visit. The HTML that you return to your user is generally not cached, so all that inline CSS code is shipped to your user's browser on each and every page load.

What solution does LESS provide?

I recommend you use a single styles.less file that includes all of the necessary CSS files you are using. Here is an example: 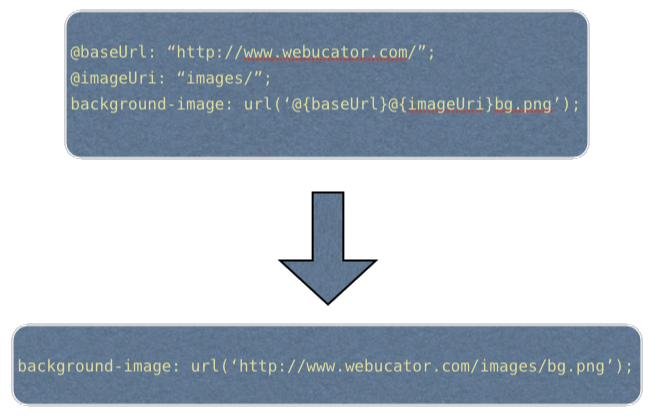 The example shows that we might want to store our site's base URL as a string variable, along with another variable to hold references to the folder where we store our images. I can then use both of these variables to output the full URL to a background image. The resulting CSS is displayed at the bottom.

For example, you might be using IE specific code that is not valid CSS to create a gradient:

We put the invalid CSS in double-quotes, and then prefix it with the ~ symbol. This tells the LESS compiler to ignore the code string, and to just output whatever is in there.

On the mac, you can compile using the lessc command:

A LESS file that contains some useful mixins that are cross-browser, including:

For production use, it is best to minimize and compress your CSS code. This makes your code lightweight, and therefore, your web site will be faster. In the end, your users will love you. :-) You can use the -x argument to the LESS compiler to minify your resulting CSS code, and you can use the --yui-compress flag to also have your resulting CSS code compressed using the YUI CSS Compressor.

I hope to write another article that details some of the differences between LESS and SCSS, as these seem to be the most popular.